RIGHT TO HARM screenings are now being scheduled in Iowa. Find out where you can view the film – or schedule one for your community.

Right to Harm is a national exposé on the public health, environmental, and lifestyle impacts of factory farms. Award-winning filmmakers Matt Wechsler and Annie Speicher (SUSTAINABLE) document the ongoing battle with factory farms in Iowa as well as in Wisconsin, North Carolina, Arizona, and Delmarva.

Find out where Right to Harm is screening in Iowa. Here’s the schedule.

Schedule a screening for your community here.

Each of Iowa’s 13,000 factory farms are built in communities of neighbors who have few protections and little ability to have a meaningful say a confinement’s location. Right to Harm addresses the devastating ramifications that many families in Iowa and across the US experience from these inadequately regulated livestock factories.

Wechsler and Speicher address the “human welfare” impacts of factory farms, revealing the social injustice of this industrial system that is largely unknown to a broad swath of US consumers.

The film also exposes the failures of state agencies to adequately regulate industrial agriculture and chronicles actions taken by disenfranchised citizens demanding justice from their legislators.

Iowa’s Fight Featured in Right to Harm: The Iowa segment examines the plight of an Iowa County resident who was confronted with two 1200-head CAFOs built across from his family’s 145-year old farm shortly after he retired there. It also features the efforts of many Iowans coming together to protect their communities. 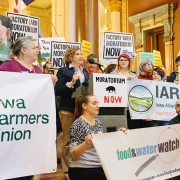 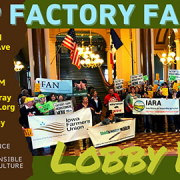 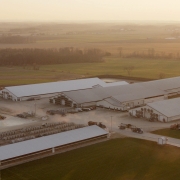 “Right to Harm” Premiers in Iowa May 29

“Right to Harm” Premiers in Iowa May 29