Send your public comments by October 29!

Attend a public hearing on October 29! 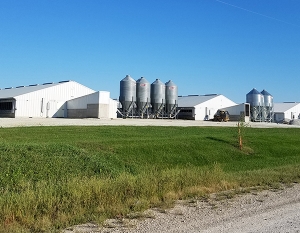 Many factory farms are built in Iowa using the “LLC Loophole.” This allows CAFOs owned by the same individual(s) to be built adjacent to each other and regulated as separate confinements. In many cases the Master Matrix, larger separation distances, and sometimes even manure management plans are avoided. This is a widespread problem in Iowa.

The LLC loophole exists because of the way Iowa defines common ownership of factory farms. One or more CAFO owner(s) that hold a majority interest in adjacent confinements would be considered a common owner(s). Only then would the adjacent CAFOs be regulated as one larger operation.

The Iowa Pork Producers Association (IPPA) proposed a rule change to fix the LLC Loophole. It would change the definition of common ownership from a majority interest to a 10% or more shared interest.

This is a very small step in the right direction, but it doesn’t address the main problem with the loophole.

CAFOs are often built under different LLC names. The DNR currently recognizes the LLC as the legal owner of the confinement, not the people behind the LLC.

The IPPA proposal does nothing to address that.

Tell the Environmental Protection Commission you want a rule that actually fixes the problem with these additional changes:

1. Define common ownership to include any individual(s) with a 10% or more interest in the LLC.

2. Define common ownership to include the “integrator”– corporations like Iowa Select – who often build multiple adjacent CAFOs under different LLC names. After all, these corporations own the hogs, feed, and direct the farmers how to raise a corporation’s livestock.

3. Require separate CAFOs built under different LLC names then later combined as one to apply for a construction permit and Master Matrix.

4. Make the rule retroactive. Iowa has a water quality crisis. Adjacent CAFOs with fewer than 1250 hogs built using the LLC loophole don’t even have to provide manure management plans. This change can help protect our waterways from manure over-application and runoff.

Send your comments to Kelli Book at the Iowa Department of Natural Resources.

Then join IARA at Public Hearing at the Wallace Building on Tuesday, October 29 from 1:00 – 2:00 pm to tell the EPC how we need to close this loophole.

IPPA opened the door to getting this problem fixed. Let’s turn out in force to get rid of the LLC Loophole all together.

Thank you for all you do.