How CAFOs Contribute to Antibiotic Resistance

The rise in public concern about antibiotic resistant bacteria in the environment could well be the Achilles’ heel of industrial livestock operations or factory farms. The association of antibiotic resistant bacteria with the routine feeding of antibiotics to livestock and poultry in large-scale confinement operations has been known by animal scientists since at least the 1970s. The problem of disease outbreaks discouraged the widespread crowding of animals into confinement buildings until animal scientists discovered that routine use of antibiotics could suppress diseases to a manageable level. The discovery that low-levels of antibiotics in feed also increased feeding efficiency, resulting in faster animal growth, was an economic bonus for the owner. 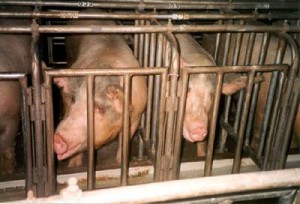 70-80% of all antibiotics in US are used in industrial livestock production.

Routine feeding of antibiotics at sub-therapeutic (low dose) levels provides an ideal breeding ground for antibiotic resistant organisms, such as the deadly methicillin-resistant Staphylococcus aureus (MRSA), which killed more than 18,000 people in 2008 – more than AIDS. The low doses are not sufficient to eradicate all the bacteria, and those that survive change their genetic make-up in response to the antibiotic.. They then multiply rapidly to generate a new population of bacteria that are antibiotic-resistant..

With the advent of factory farms, livestock producers quickly became a major user of antibiotics in the United States. An estimated 70-80% of all antibiotics in the U.S. are used in industrial agriculture. The majority of antibiotics are fed at sub-therapeutic (low dose) levels for disease prevention and growth stimulation. A comprehensive 2004 U.S. General Accounting Office review of the scientific literature on antibiotic resistance clearly linked antibiotic resistance to livestock feed. They reported that “many studies have found that the use of antibiotics in animals poses significant risks for human health, but a small number of studies contend that the health risks of the transference are minimal.”[1]